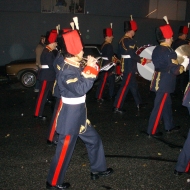 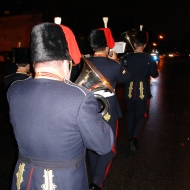 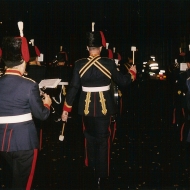 If one thing were to sum up public celebration, something that stirs people to wave paper flags, cheer and throw ticker tape at their hometown heroes, it could be the humble marching band – though the imaginary ego of a marching band would hardly be described as ‘humble’. The job of the marching band is to loudly announce with military showtunes that something is happening or about to happen, and draw the crowd reverently in, Pied Piper-style, to partake in group celebration.

Like the events they play in, marching bands are loud and flashy. Shiny buttons, spit-and-polish shoes, and brass instruments that gleam in the sun and share their notes noisily over five blocks or so. Marching bands perform at military parades, football games, public street parades and amusement parks. Spot the odd one out.

The amusement park. Ever get that feeling at amusement parks that something is not quite right? Besides the totally fabricated environment, vastly overpriced food and rides, walking animal mascots with oversized heads and the fact that there is always a trashcan when you need one? That feeling comes from you, with your entry ticket as proof, giving your consent to join in this synthetic reality – fake fun – contrived consumption – uneasy entertainment. (That’s why visiting amusement parks on drugs is the only way to do it, your altered mental state and the altered physical environment cancel each other out, and you can finally relax!)

In an amusement park at regular daily intervals, a marching band will trot out, march neatly up and down the main ‘street’, belt out some oldies-but-goodies, and trot back into that rarely seen part of an amusement park, Backstage Land and Crappy Staff Accommodation Land. But what did they celebrate? Nothing. They merely simulated celebration in a place dedicated to the reproduction of reality, one that is pristine, perfect and most important of all, fun. In Glide Step the purpose is precisely this – to provoke and examine reactions to reproductions of public celebration.

Reproductions also lie within the marching band itself – another bubble burst, marching bands that do not actually “march.” Glide step is a step used by marching bands to mimic marching, so as not to disrupt the rhythm of their music. The heel is gently brought to the ground with the toe pointed, and then rolled forward onto the toes before the foot is lifted. The glide step is also used when the band is not moving, but pretends to march on the spot creating a copy of a movement.

And as simulacrum is a copy of a reality that has become a more realistic version of the original, Glide Step becomes a copy of a copy. The highly choreographed foot movement that mimics marching and successfully convinces us of its authenticity despite its fakeness, is a simulacrum of movement and its enaction within Velkova’s performance is part of a larger deceptive reality – a celebration of nothing.