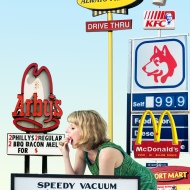 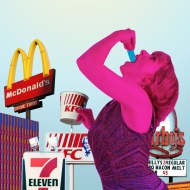 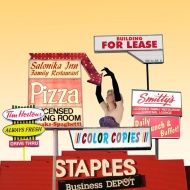 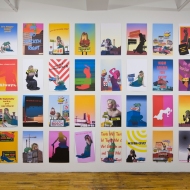 The Temptations of Dr. Antonio, 50 digital prints, 14” x 22” (2010). This work appropriates the style of vintage horror and “B” movie posters, and depicts a giant woman who descends from a billboard and begins to consume advertising signs, popular restaurant chains and billboards seen around Saskatoon. Even though the consumer backdrop is local, such commercial design can, in fact, be found anywhere in North America, making the posters a pastiche of advertising slogans, movie references and kitsch culture. The Temptations of Dr. Antonio was a response to the rapid development of the urban landscape of Saskatoon, which later developed into a public bus project entitled Public Relations.