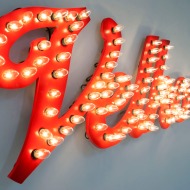 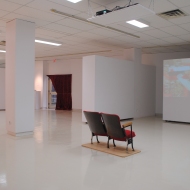 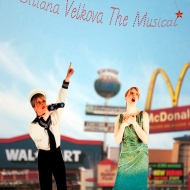 Biliana Velkova-The Musical! (2010) is a personal story about coming of age within two distinct ideologies, communism and capitalism and the impact of immigration and assimilation. It also gives a glimpse of my two worlds and my navigation between them. It strives to add to our collective memory of communism, no matter what the reality of it was. Biliana Velkova-The Musical becomes part of the dialogue that is currently surfacing around the relevance of post communist realities and discourse.
The installation consists of a stop-motion animated film (Biliana Velkova-The Musical, 12min, 2010) projected on a gallery wall, two theatre chairs, red velvet curtains at the entrance of the gallery, a vintage popcorn machine and the name “Biliana Velkova” as a large illuminated marquee sign.
Advertisement
Loading Comments...